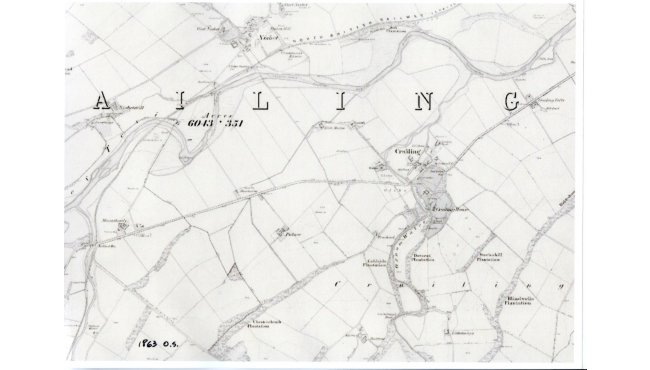 This is historical theory based on time spent looking at old maps. It is not historical fact! I suggest that, prior to the nineteenth century, the main road from Jedburgh to Kelso left Jedburgh town at Hartrigge, just before the bridge over the Jed Water. It passed Woodend and then followed the course of the Borders Abbeys Way to cross Dere Street. It then took the route of St Cuthberts Way, passing to the south of Palace farm instead of, as now, to the north of it, to join the unclassified road about three hundred yards west of Braehead. A few hundred yards further on (at Crailing Orchard house) the route left the unclassified road to head straight on, towards the Oxnam Water. A bridge here took the road over the Oxnam Water and on, up the hill between where the stable cottages and the mansion house now stand. It must be understood that this was before these buildings were built, at the turn of the 18th century. (Crailing House was built in 1803). The main road then continued along the route of the estate track to East Lodge where it joined the existing A698 and on to Heiton (formerly known as Hightown). My theory (based on maps from 18th and 19th centuries) suggests that, when W. Paton bought Crailing estate and built his mansion, he built a new bridge (Crailing old bridge) and re-routed the main road around his estate. This was not unusual at that time and whole villages were moved in some parts of Britain to improve the view from a stately home. This theory is borne out by the New Statistical Account of Scotland from 1845 which states that the new Crailing bridge was built by public subscription to replace an earlier structure that had been a little further upstream. The map here shows the route that I suggest was the main road, through Chestercleuch Plantation, past Braehead and straight on towards Crailing Tofts.
© Copyright CEN 2016-2021